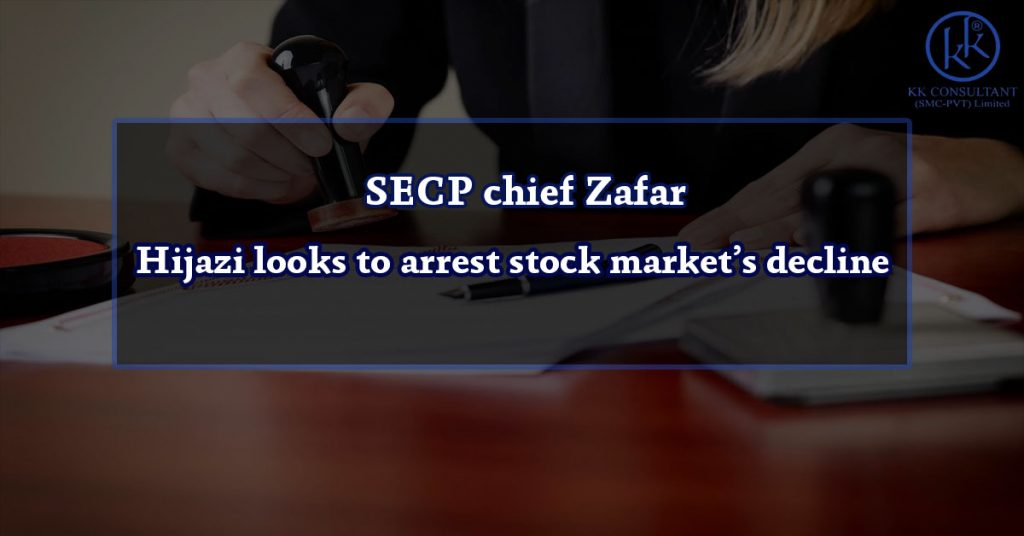 Under-fire and out-on-bail chairman of the Securities and Exchange Commission of Pakistan, Zafar Hijazi, has urged rescue of the country’s stock market, asking brokerage houses to communicate positive advice to clients in a bid to arrest the decline of share prices.

Hijazi, who faces charges of tampering with records of the Sharif family’s companies, was granted transitory bail till July 17 by the Islamabad High Court.

While the case is ongoing, Hijazi took the time to visit the Pakistan Stock Exchange (PSX) on Thursday and advised high-powered members of the brokerage community to rescue the market from a decline that has seen the KSE-100 – a benchmark index – fall over 17% in just over a month and a half.

Hijazi said that the market has fallen victim to political uncertainty with Prime Minister Nawaz Sharif battling to save his government amid allegations of corruption and money-laundering.

“However, there is nothing wrong with company fundamentals which have remained intact,” Hijazi was quoted as saying during the meeting. Hijazi was further quoted as saying that local investors, particularly individual ones, were the directly affected by the bloodbath at the market. However, brokers should play a positive role, he added.

The PSX’s board of directors and brokers who participated in the meeting included Arif Habib, Abdul Majeed Adam, Amin Tai, Muhammad Sohail and Farid Alam, it was learnt.

According to an official privy to the matter, Hijazi began the meeting as if it was going to be his last one with brokers. However, he ended the meeting on high expectations that he would continue as SECP chairman going forward.

A PSX statement added that Hijazi emphasised all market intermediaries to play their due role in working together towards its advancement. “This will support his personal vision and vision of the Commission to make Pakistan the choicest investment destination and a regional hub,” the statement added.

He emphasised that corporate fundamentals and economic indicators were encouraging and should have a positive impact on the market.

The chairman expressed his satisfaction over the functioning of the risk management regime currently in place despite volatility in the market. He added that the SECP was also closely monitoring the market through a dedicated team and specialized Systemic Risk Management Department. He praised the development in the mutual funds industry and its expansion.

“The market participants lauded the reforms introduced by the SECP under the leadership of Chairman Zafar Hijazi and his efforts for the development of the capital market and mutual fund industry,” the statement said.

Published in The Express Tribune,  2017.